More to be desired are they than gold, yea, than much fine gold (Class: Wizard) 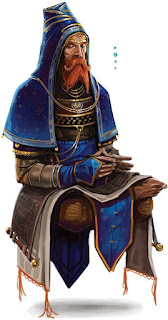 You are a devotee of the Cosmic Law of ANU. You must keep the covenants, and thereby keep the wheels turning.

You gain +1 Magistrate Die per level, which function the same as Magic Dice.

Perk: When you enter a situation, you always know how its laws deviate from common law. Laws include Cosmic Laws, Physical Laws, Moral Laws, Civil & Military Laws, and Courtesy Laws.

Drawback: Knowingly breaking a Law disables all your abilities until you make restitution/receive punishment.

(If you don't know the common law for some situation, try and find the equivalent in the code of hammurabi.)

By spending 1+ MD, a tier three law may be upgraded to tier two (or may stay the same tier). 2+ MD may be spent to upgrade a tier two law to a tier one law (or with 1+ MD may stay the same tier). You may spend any amount of additional MD on this upgrade. [Sum] may be distributed to upgrade the following (which start at their lowest value, and are upgraded by steps costing their new value):

Immediacy*: 1 Afterlife Consequences / 2 Within the Year / 3 Within the Week / 4 Right Now

* For tier three this is based on lawful discovery chance. For tier one this doesn't apply.

** For tier one this doesn't apply

Most laws start with some place on these tracks. "Eat soup with the Soup Spoon" for instance is a tier three (4/1/1). If you upgrade it to tier two, it stays (4/1/1) but is now naturally punished (You are naturally disappointed in yourself or 1 damage). If you spend 2 of your [sum], you can upgrade the severity (I dunno with this one, at least 1d6 damage in morale). (I'm not going to write for every edge case, figure it out. This class will cause arguing, its called Ludo-narrative resonance)

You can decrease laws in a similar way, but this counts as breaking them.

At Second Level, you can store up a law you encounter and implement it in another situation with 1 MD. After all, it is an emanation of the Cosmic Law.

At Third Level, you can change the punishments (or rewards) for Laws, as long as they are equal. For instance, you could change fines to lashings, or ostracism to mockery.

At Fourth Level, You create a Demiplane. Its inadvisable you enter this Demiplane until you collect sufficient laws to allow you to exist in it.

Posted by Pilgrim Procession at 6:05 PM

Email ThisBlogThis!Share to TwitterShare to FacebookShare to Pinterest
Labels: law, Logic, Why, wizards

Look! They come! The Eminences!